League Of Legends Turkey Grand Final 2017 Champion is 1907 Fenerbahçe Esport!  Hello, Gaming in Turkey followers! We have a news from E-Sport in Turkey which is coming from League of Legends Turkey Summer Season Finale. This year, one of the top 3 football clubs E-Sport Team is a champion. Fenerbahçe’s 1907 Fenerbahçe E-Sport Team, beat BAU SuperMassive at finals with 3 – 0 score in BO5 ruled final match and became champion. Let us briefly give information about the organization and champion. League Of Legends Turkey Grand Final 2017! Final champion 1907 Fenerbahce Espor. 1907 Fenerbahçe, who had an incredibly good season and finished the league with his leadership and declared its championship after 3 matches in the finals. In the League Of Legends Turkey Grand Final, 1907 Fenerbahçe defeated BAU SuperMassive 3-0 and became champion. League of Legends Championship League 2017 Turkey Grand Final in the championship found the owner of the cup. Almost 12.000 League of Legends and E-Sport fans were at Ülker Sports and Event Hall. With live streams, bringing together more than a million E-Sport lovers at the end of the big finale and at the end of the cup of  1907 Fenerbahce Esport beat BAU Supermassive with 3 – 0 score and became a champion!

The winner of the League of Legends 2017 Turkish Grand Final of the Championship League was announced with a spectacular final on August 19th at the Ülker Sports and Event Hall. 1907 Fenerbahçe E-Sport was the champion of the 2017 Turkish Grand Final, which was held by Riot Games Turkey this year and became one of the biggest sporting events of Turkey now, defeating BAUSuperMassive eSports with a 3-0 score. 1907 Fenerbahce Espor showed his success in becoming the champion in his first year. With over 1 million viewers gathered per live broadcast. Talking about its name with big shows organized every year, TGF 2017 was colored with an impressive opening which showed 5 years of eSports with League of Legends.

Bora Koçyiğit: We have signed one of the biggest sporting events of Turkey!

Riot Games Turkey Country Manager Bora Koçyiğit evaluated League of Legends Champions League 2017 Turkey Grand Final with the following words: “We are very happy to come together once more with E-Sport fans in the 5th year of our League of Legends  Championship Turkey Grand Final. At the 2017 Turkish Grand Final, where the top of the championship league is determined, we have realized one of the biggest events of Turkish sport, not just showing the biggest E-Sport activity that Turkey has ever seen. I would like to thank our sponsors for the support given to İşbank Maximum Card, MediaMarkt, Migros, and Gilette for this giant organization, especially Ülker and Vestel who are the main sponsors of TBF 2017. “

League Of Legends Turkey Grand Final 2017 “As Riot Games Turkey, we have been working for the development of the E-Sport concept in our country for the last 5 years. With the intense interest of the young people in Turkey, we were able to take this effort shortly. We have transformed this new form of struggle based on strategy, reflexes and team play, which has become so widespread in the world, into a giant stream that brings together tens of thousands of halls and stadiums, millions on screen, just as it is in other developed countries of the world. Fenerbahçe, Beşiktaş and Galatasaray, hosted well-established sports clubs of Turkey and this organization grew the champions who successfully represented our country in the world. I thank the teams who have been fighting gently and professionally for the whole season, the League of Legends and E-Sport fans who have contributed their efforts to transform this beautiful fantasy dream into reality. I would like to congratulate 1907 Fenerbahce Esport Team or the TBF 2017 Champion who will represent our country in the world championship in China. I believe that they will achieve great success there and will continue to wave our flag proudly in international struggles. “

Celebrities were at the E-Sport final TGF In 2017, a well-established brand such as Fenerbahçe were the champion, the investment they made in E-Sport and the value they give, the number of businessmen of Turkey such as Ali Koç and Sina Afra to take place in the finals. The support of sponsors such as İşbank Maximum Card, MediaMarkt, Migros and Gilette and main sponsors Ülker and Vestel and the interest of the media and such an intense community were important. In addition to this hundred of thousands follow the finals both on the Ülker Arena and on the digital streams are getting E-Sport interest very top-level and in the name of our country, on behalf of the game sector and the development of E-Sport is very important. We hope many other companies, along with raising E-Sport interest and stepping up their investments a sector-specific E-Sport. 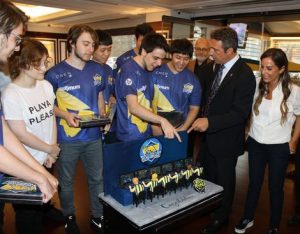 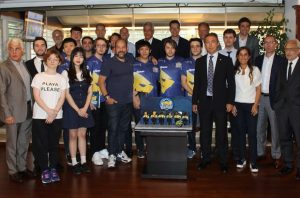